To create a resource to demonstrate how Tilda Rice can help hospitality businesses as they get back up and running, helping them to adjust to ‘the new normal’ since the Covid-19 outbreak. 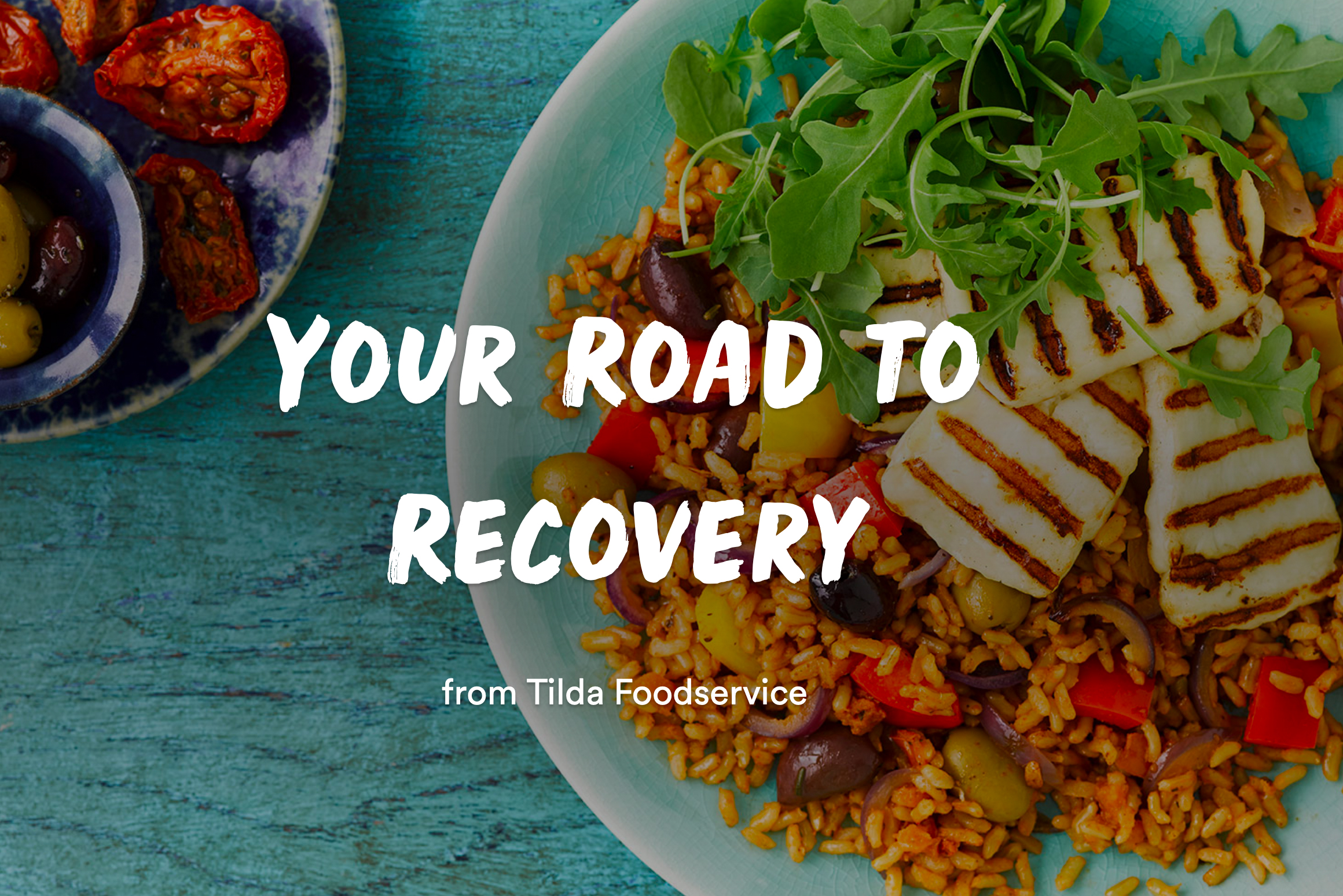 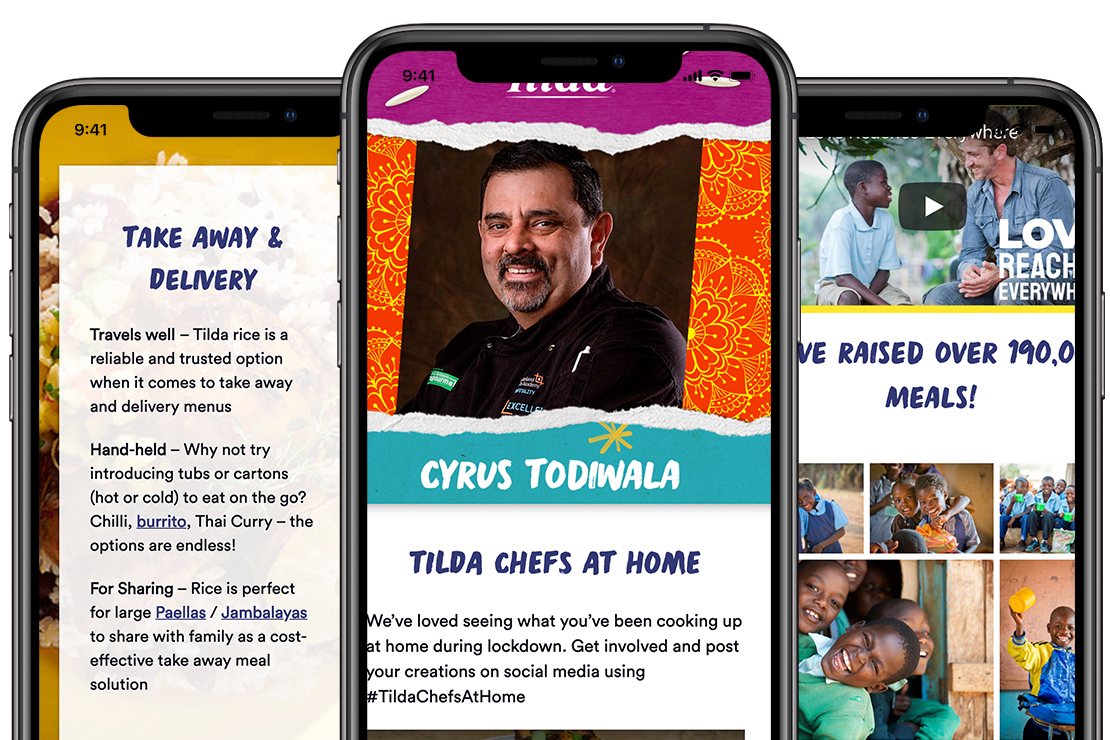 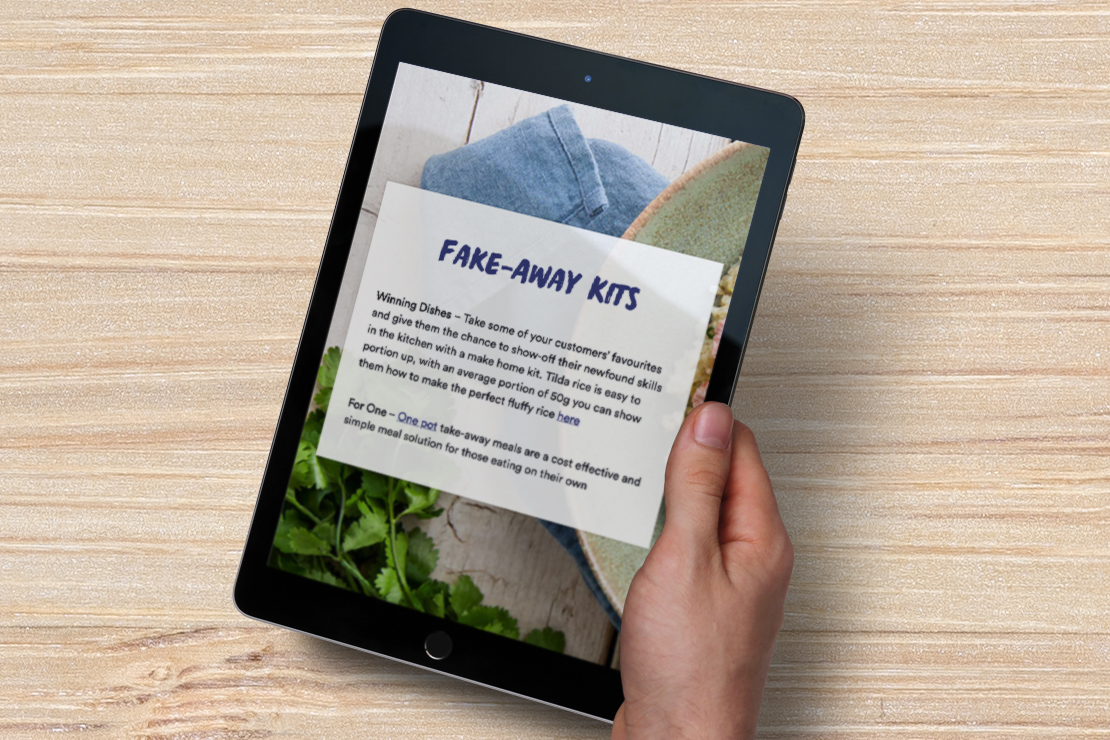 Having studied the global hospitality sector trends in detail, we created the ‘Tilda Toolkit’; an online resource linking to useful information across the Tilda website; incorporating in-depth knowledge on the industry impacts following Covid-19 and crucial recommendations on how operators can adapt to ‘the new normal’. With consumers now prioritising their health and hygiene more than ever, we provided operators with practical hints and tips on how Tilda Rice can help their business to evolve to fulfil these needs.

We also offered advice on how to use outdoor space, adapt to contactless ordering and payment, utilise delivery and takeaway, manage overheads and leverage the demand for take-home recipe kits. With rice offering a range of benefits from plate fill to stability, value for money to versatility.

Anecdotal feedback from the sales teams has confirmed that the toolkit has been a valuable resource for their customers and has allowed them to open up new conversations with key customers and suppliers, as well as being a useful tool to utilise in meetings. It also proved a hit with industry titles featuring on The Caterer website homepage and across other leading online publications.

You can view the Toolkit on the Tilda website here: Tilda Toolkit

As Covid hit and plans had to pivot to respond to this national crisis we were tasked to come up with a campaign that showed Sarson’s support for fish and chip shop operators and celebrated the great work in the community they were doing during lockdown. 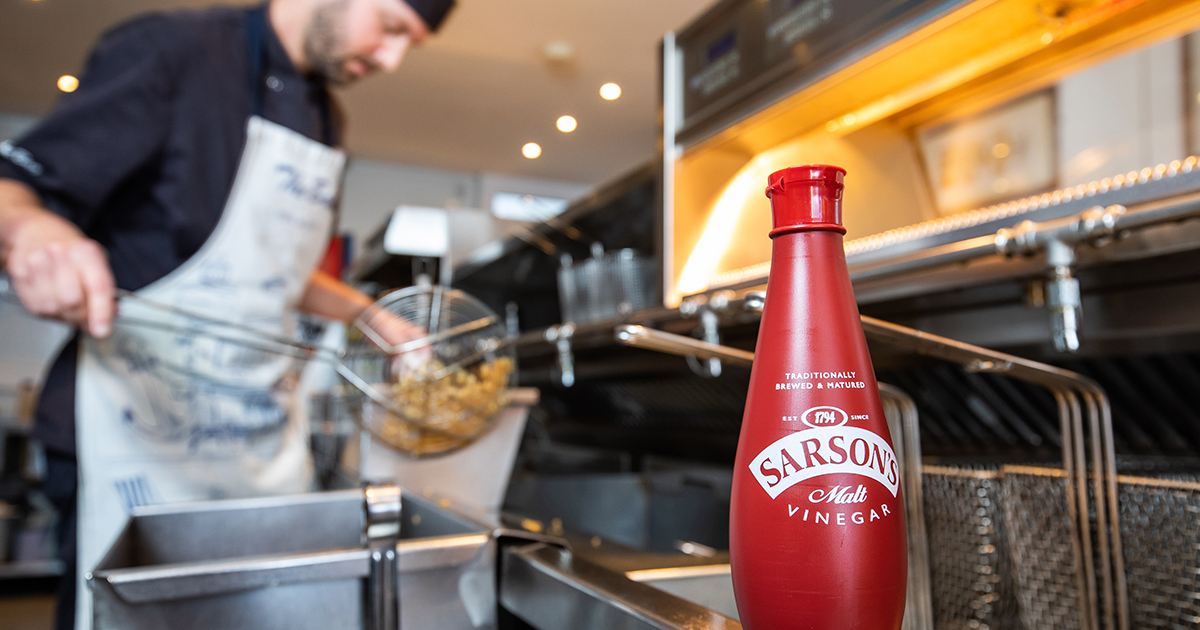 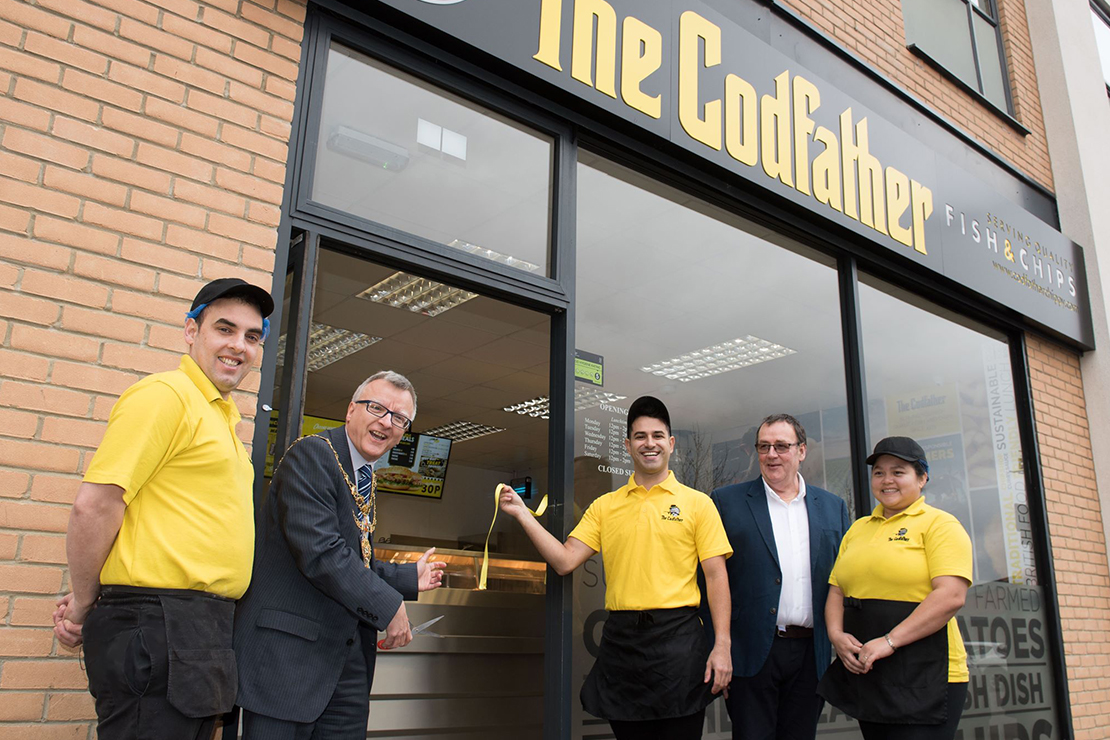 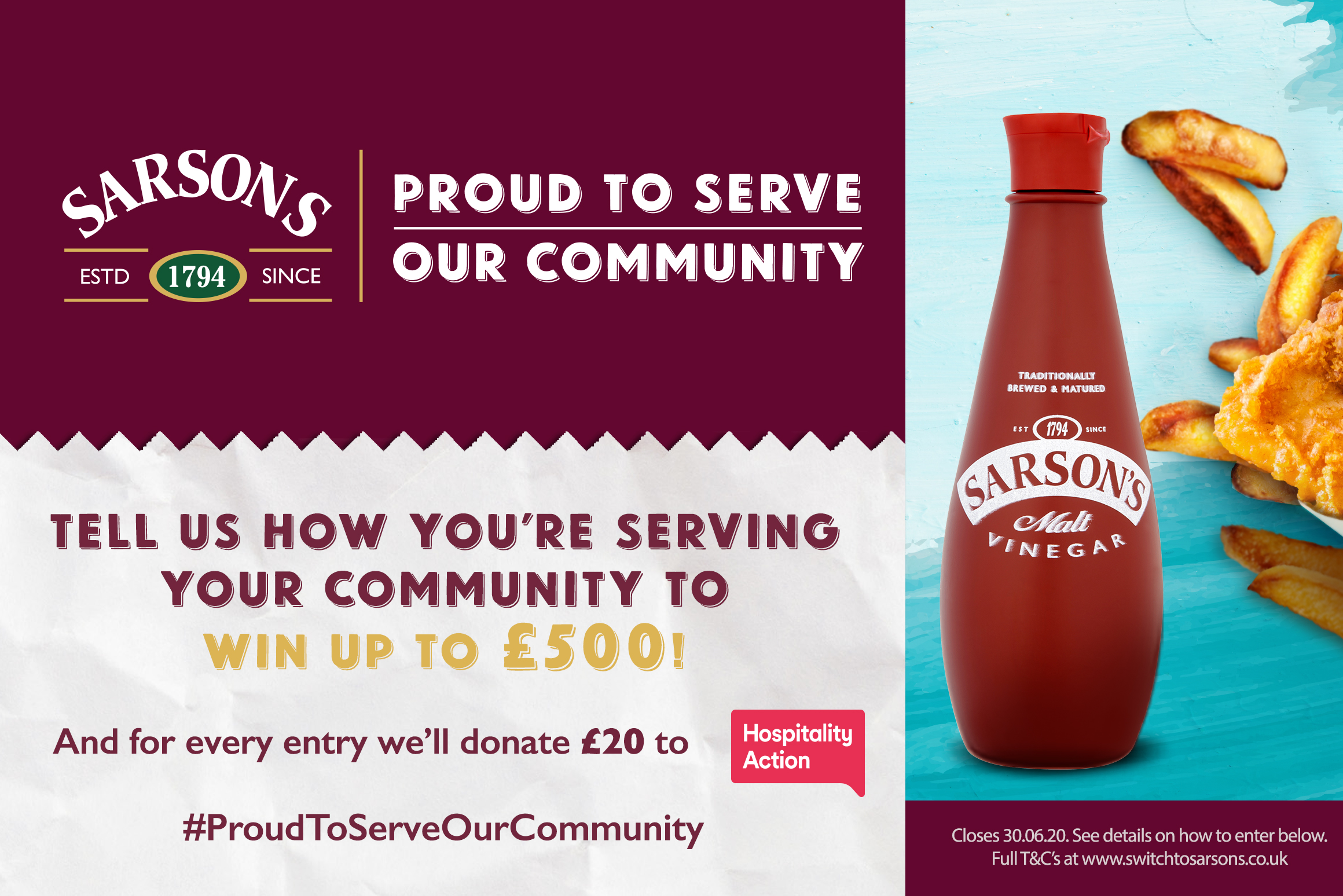 To move quickly we took to social media and Sarson’s newly established Facebook page dedicated to Chippies to launch our Proud to Serve Our Community campaign. An extension of Sarson’s Proud to Serve Quality Fish and Chip Shops of Great Britain, it championed the chippies around the country who rose to the challenge to support their local communities during the pandemic. All they had to do was share their story on Facebook using the campaign hashtag and tagging in Sarson’s. The overall winner judged by a panel of industry experts from NFFF, Sarson’s and Hospitality Action would win £500 to put towards their next wholesaler delivery and five runners-up £200 each.

What’s more, in a move to help support the wider industry including fish and chip shops Sarson’s generously donated £50 to Hospitality Action’s Covid Appeal for every valid entry.

The competition which ran during May and June 2020, captured the hearts of the chippie community as well as industry titles and showed how Sarson’s is committed and proud to serve them through thick and thin.

• 10 entries resulting in a £200 donation to Hospitality Action
• The Codfather in Aylesbury was been chosen as the winner of the £500 prize – their community ‘pay it forward’ initiative saw them team up with a local foodbank to provide vouchers for every portion of fish and chips sold. They then matched every single donation, effectively doubling the number of vouchers the food bank could provide. The end result saw 250+ meals donated to those in need.
• 5,100 engagements across social including our most successful post to date –announcing the winners – which received 1,165 individual engagements, including a record 48 shares.
• PR in all key chippy titles accounting for some 80,000 OTS

“When Covid hit we were keen to champion fish and chip shops and support them in a practical sense, so when Jellybean came up with the Proud to Serve Our community campaign and managed to switch it on almost overnight we were delighted. As an agency they have showed exceptional creative and strategic thinking as well as agility, proactively coming forward with ideas for the brand to help us respond in these unprecedented times.” 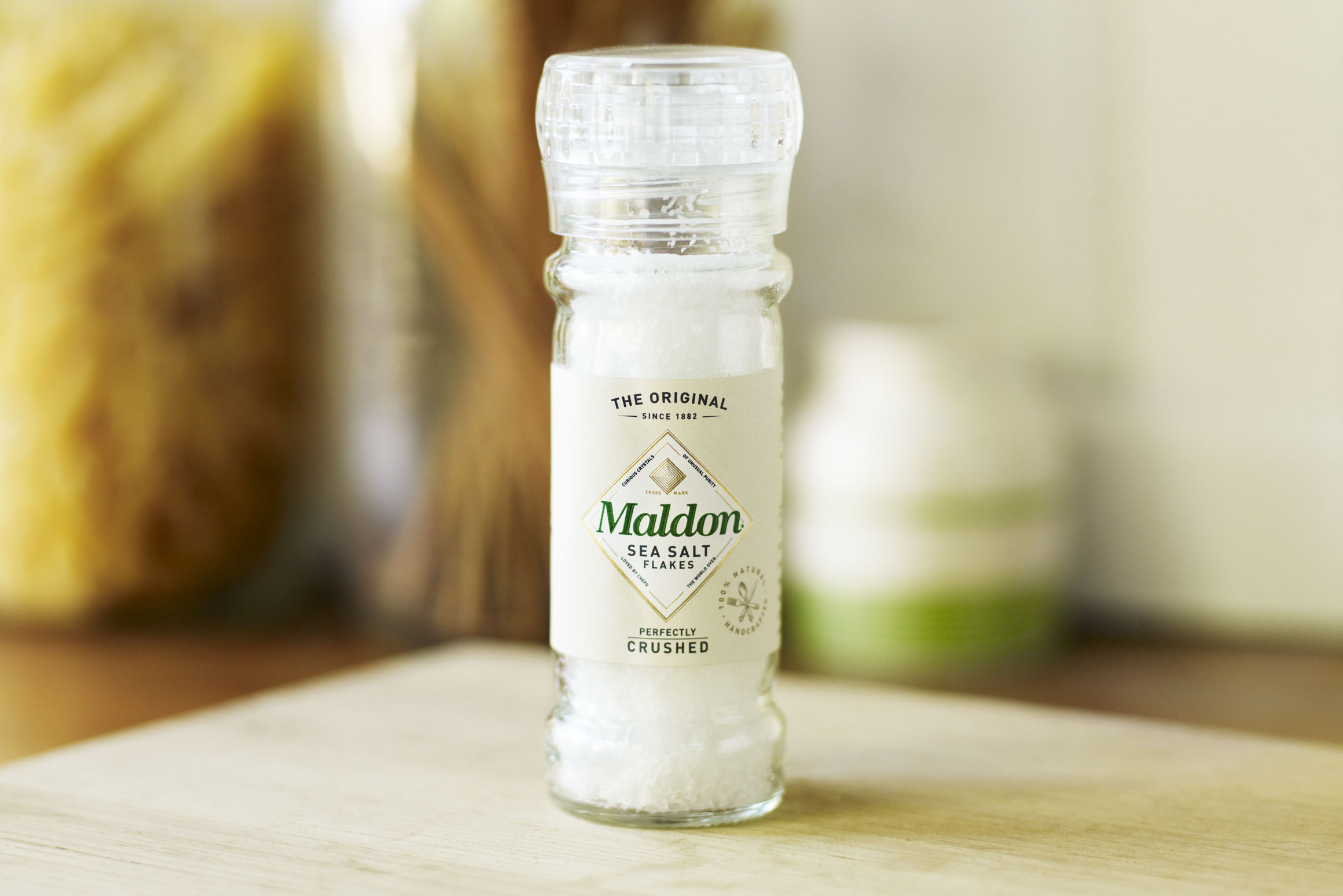 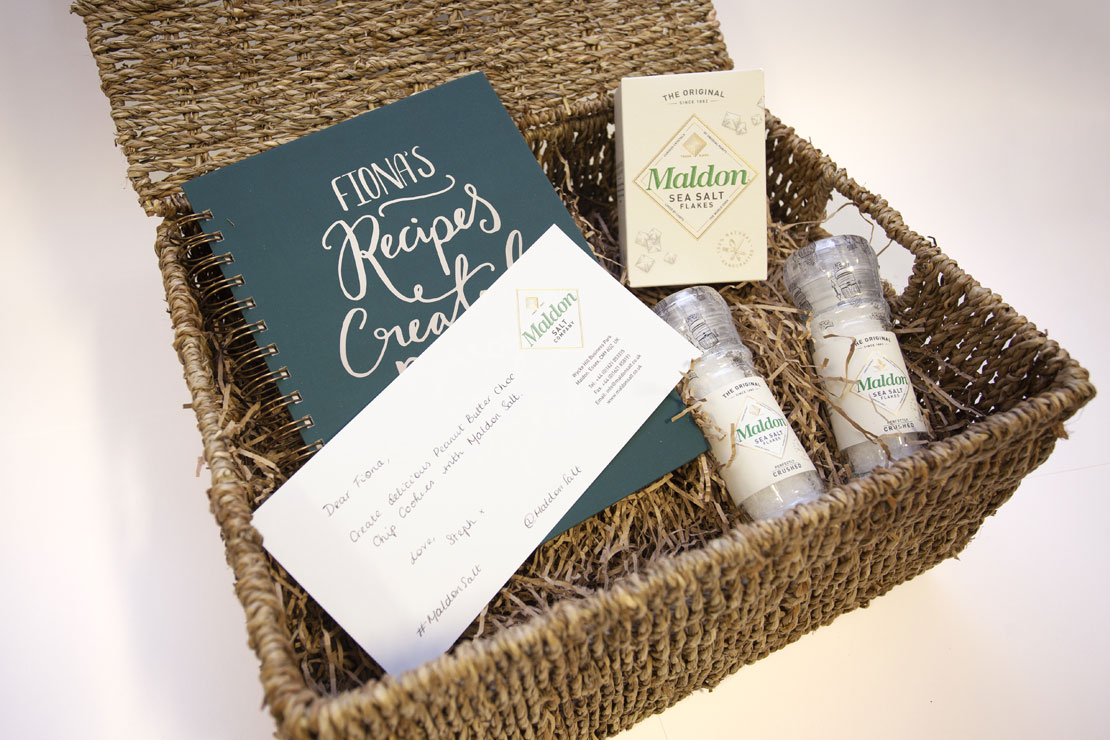 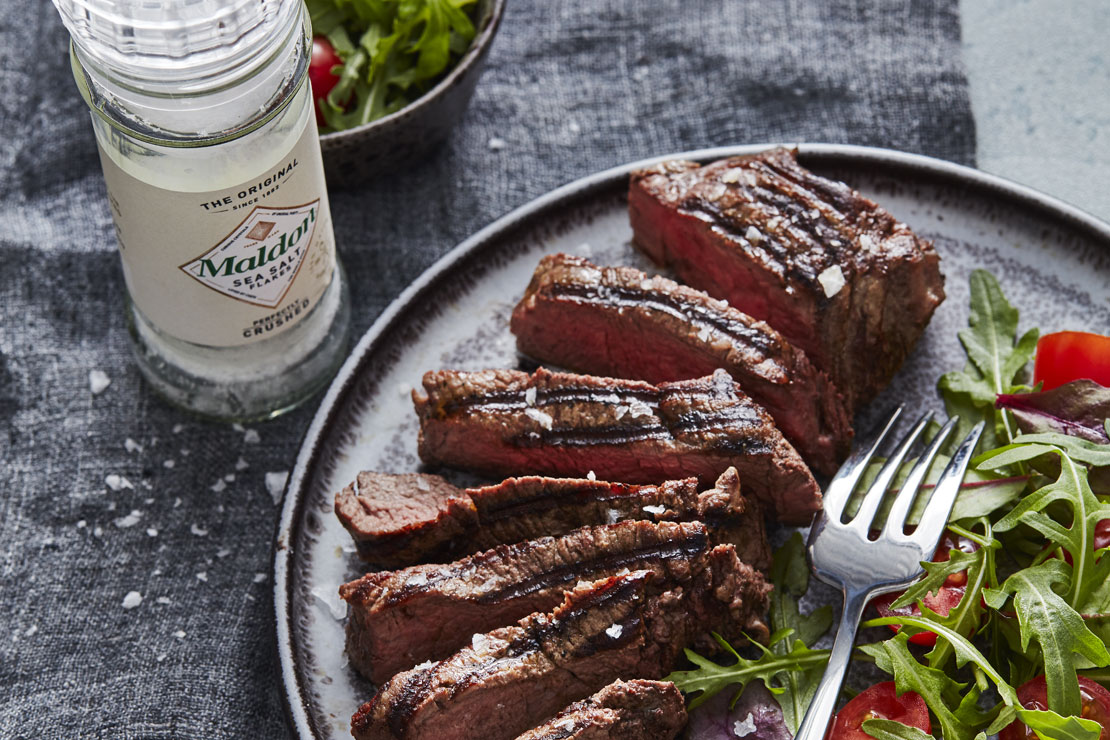 Although Maldon Perfectly Crushed Original Salt Grinders were not strictly a new product, having been first launched into the market back in 2017, they had never been PR’d before and they had also recently secured a new nationwide listing in Morrisons. We therefore seized the opportunity to devise and implement a full PR launch campaign.

Leading with the news hook of the new supermarket listing, we created and delivered gorgeous recipe box press hampers (containing a personalised recipe book and all the ingredients to make peanut butter cookies featuring Maldon Salt) to key consumer and trade press, as well as providing a media bank of incredible seasonal recipes and photography from top chefs featuring Maldon Salt.

With a hard-working press office in place throughout the season we were able to target and seize upon news, product and recipe placement opportunities which catapulted Maldon Perfectly Crushed Original Salt Grinders into the media spotlight and in turn into the public’s conscience and their shopping baskets.

We exceeded KPIs across every qualitative and quantitative measure set. We achieved more than 20 pieces of coverage across target media including Daily Mail, Sunday Express, Love Food, Foodepedia and many more, with a reach running into millions.

“We are absolutely delighted with the PR campaign and the sales performance of our Perfectly Crushed Salt Mills. The activity with Jellybean created real impact and positivity with media. The resulting editorial coverage has perfectly communicated why our grinders are such a convenient way to elevate food and showcased their eco-friendly credentials, because they can be easily refilled and re-used time and time again.”

As a result of our successful working relationship with McCormick EMEA, we were approached by the Flavour Solutions global team at McCormick to create their first ever global marketing support kit, to be used across multiple worldwide markets in sales meetings with customer’s R&D and marketing teams. The purpose being to educate key partners on McCormick’s flavour technologies and capabilities, particularly FlavourSpice™ – McCormick’s proprietary spice alternative platform.

The key objectives were: 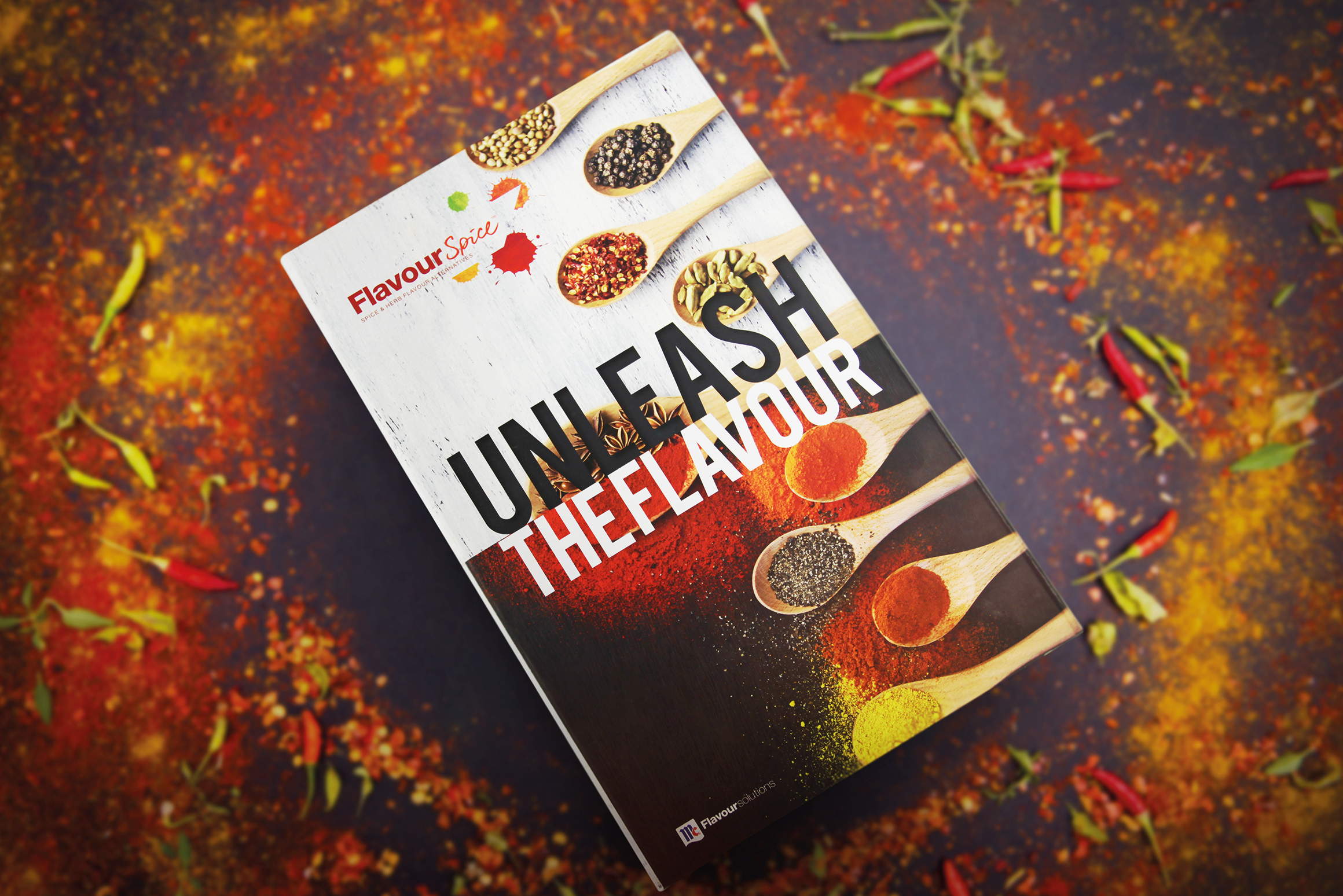 We have created two types of sales materials so far for FlavourSpice™:

The presentation box has been so well received that we are now working on developing a promotional video, using our in-house video editing capabilities and creative flare to produce something fast paced and dynamic. Watch this space!

The client at McCormick Global had this to say regarding the project:

“The Flavour Spice Commercial Box was the first globally launched kit for McCormick Flavour Solutions! It has been well received by our partners and customers around the world and seen as an engaging way to showcase and demonstrate our capabilities. Jellybean did a great job in providing creative as well as logistic support in getting these boxes to our commercial teams across the UK, Canada, Mexico, India, China, Singapore, and Australia!”

We were asked to help our longstanding client Lakeland Dairies launch its new Pour & More cream alternative into SPAR Stores throughout the South West. 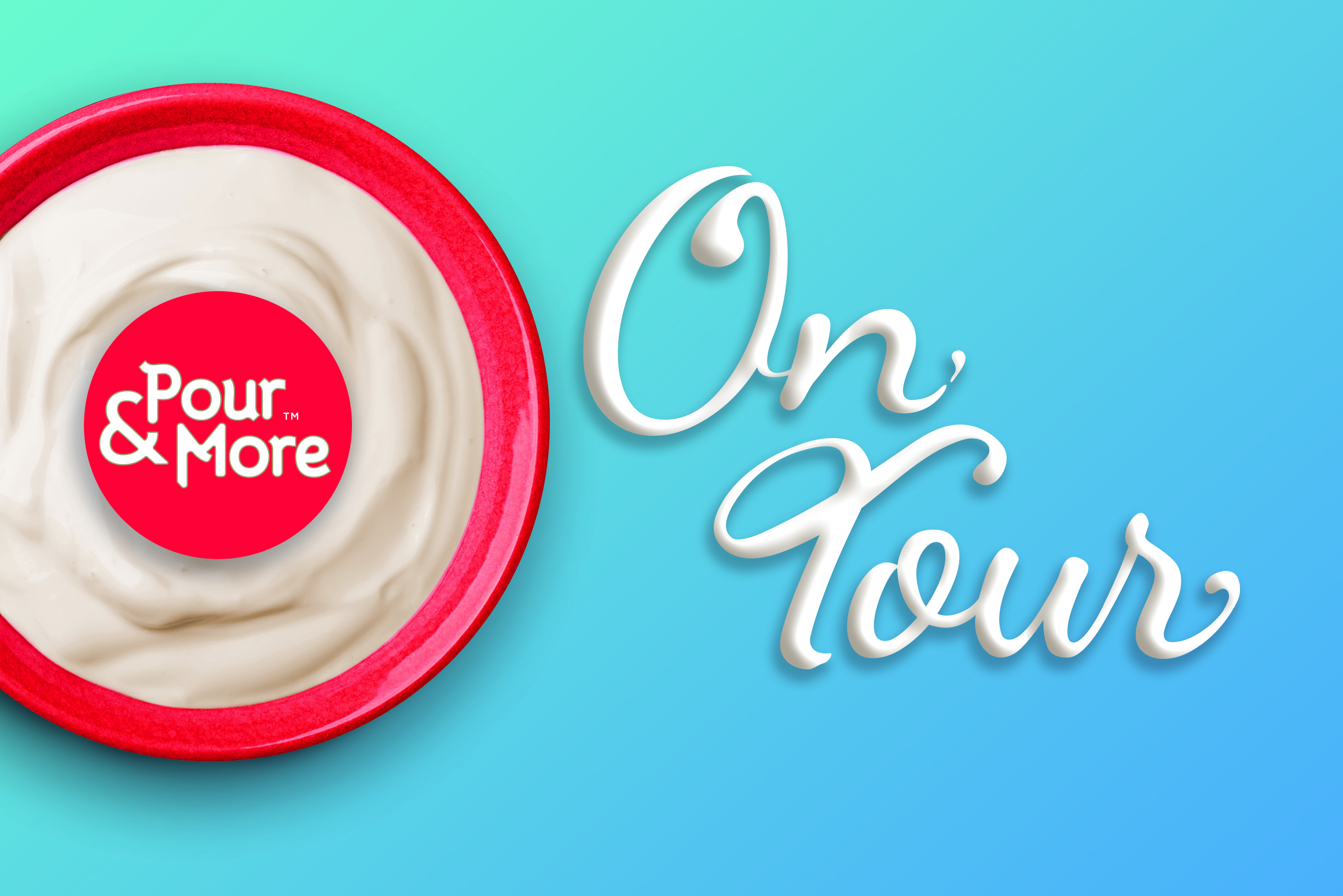 To drive both retailer awareness and pull through from Appleby Westward (SPAR Retail Distribution Centre for the South West ) as well as to create a push campaign to SPAR shoppers we devised an in-store sampling campaign, aptly named Pour & More On Tour.

Running over a two week period and timed to coincide with an attractive 75p price promotion, our Brand Ambassador, complete with fully designed sampling kit, ran a series of sampling days. The engaging activity ensured Pour & More’s USPs were clearly communicated to both retailers and shoppers and of course there was a big focus on taste – hundreds of samples of Pour & More were served with delicious fruits and apple pie slices.

To help retailers drive awareness and footfall into stores during the sampling days we supported them by creating exciting social media content that they could share with their followers across their own social media channels.

We also ran a social media competition to encourage shoppers to take a picture of themselves enjoying Pour & More and using the hashtag #PourandMoreOnTour. The winner received a case of free product.

The campaign delivered on every level achieving excellent scores for Awareness, Engagement, Conversion and Repeat. Such was the success of the campaign we expect to bringing the tour to many more retailers and shoppers over the coming months as distribution continues to grow. Watch this space.

“It's been really popular here, I've had to order case after case. The customers are trying it and preferring it to Elmlea! They especially like the pourable spout. It's a great new product!”