Kanzi® Apples are grown around the world and are a natural cross between the Gala and Braeburn varieties. Consumer awareness and distribution of Kanzi® in the UK is fairly limited compared to other European markets. GKE NV, the variety manager of Kanzi®, tasked Jellybean with helping them get closer to the UK shopper, converting more of them to try and buy Kanzi® and in doing so prove to buyers in the trade that Kanzi® is an apple brand they should support and stock more widely. 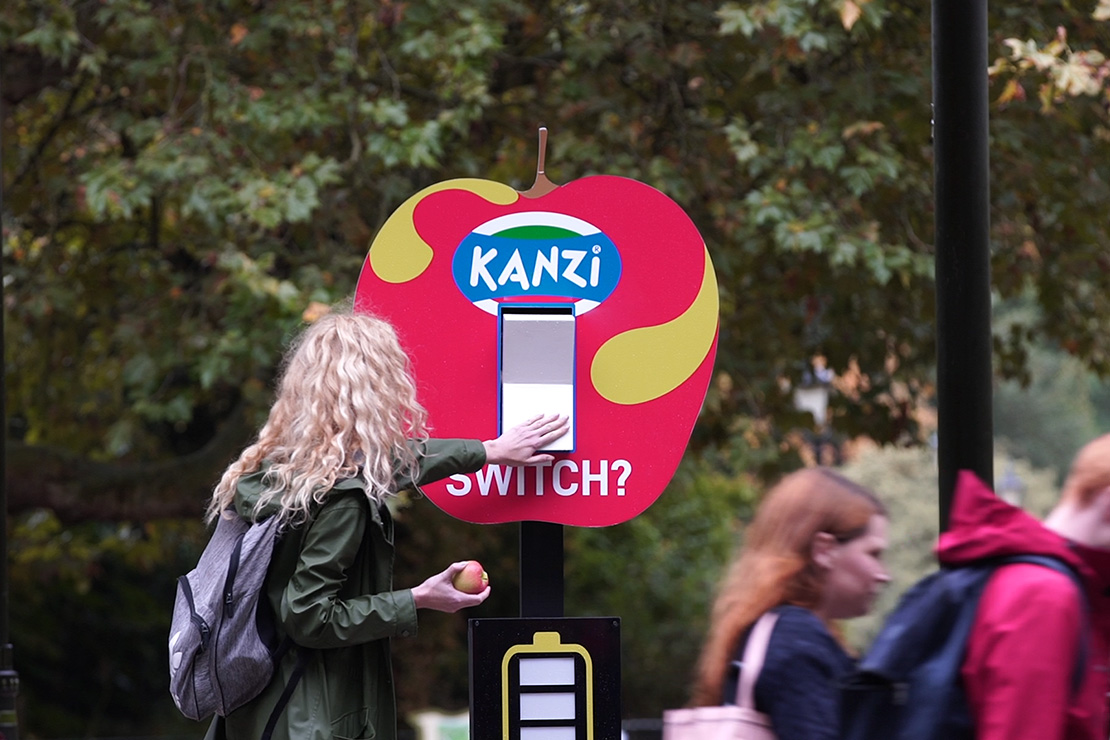 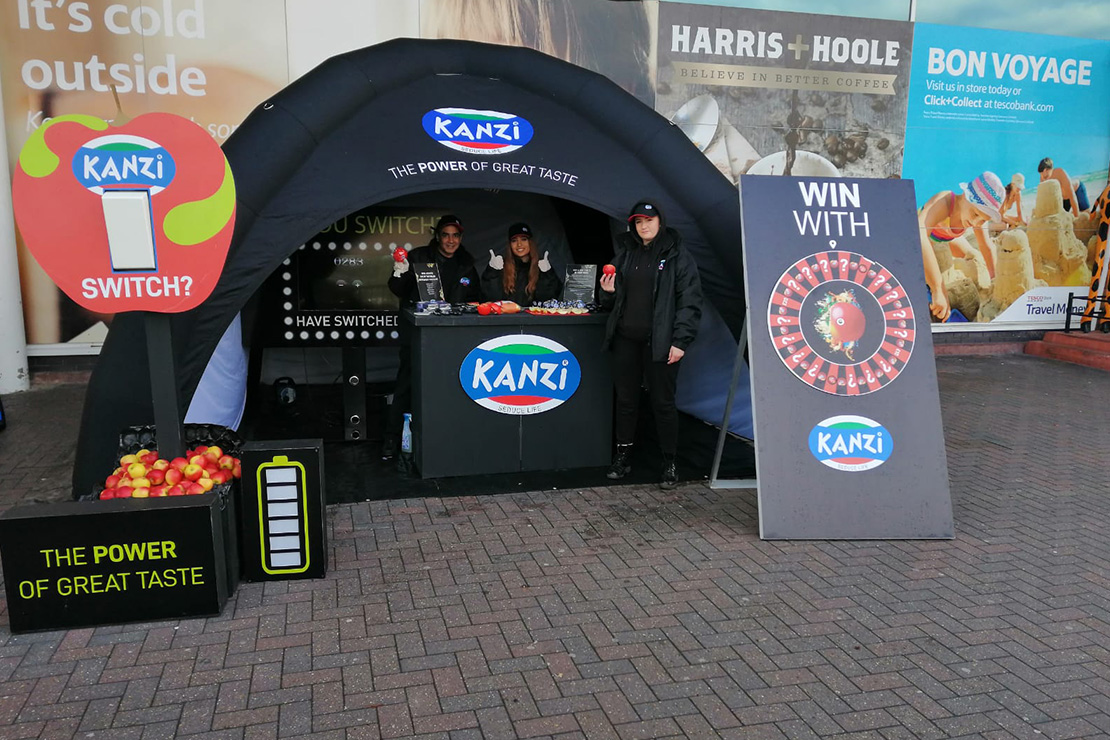 Through research Jellybean identified that most UK shoppers buy the same variety of apple they grew up with and rarely try new apples. With this insight, we created a campaign that would leverage the brand’s global marketing positioning: “The power of great taste – seduce life” and invited UK shoppers to experience the power of great taste for themselves and literally make the switch to Kanzi®.

Our powerful integrated marketing campaign idea was the Kanzi® Big Switch. Will you make the switch to Kanzi®? It centred around a giant customised switch that we took on a tour of UK supermarkets and shopping centres alongside engaging experiential sampling activity, social media, influencer marketing and trade and consumer PR to encourage consumers to try Kanzi® and make the switch to Kanzi® as their new favourite snacking apple.

To kick off this high-profile campaign we filmed and released a video stunt. Secretly recorded in Battersea Park, London, the video was set up to become a social media sensation and in doing so raise awareness of the Big Switch tour. The video shows how we placed crates brimming with free Kanzi® apples beneath a big power switch and the message: “Will you Switch?”. Consumers took and enjoyed the Kanzi® apples before pressing the big switch. What happened next was an incredible spectacle of colour, music, dance and acrobatics. An immersive experience to symbolise what can happen when you experience the power of great taste. The video was seeded with great effect through influential London news sites as well as boosted across Facebook and YouTube.

Next, we embarked on our tour of Tesco Extra stores and shopping malls near Sainsbury’s stores. Our high impact experiential installation, complete with Big Switch, sampling stations, spin to win gamification and a social media competition to win a trip to the Big Apple was designed to be extremely fun and exciting. Importantly is was focused on driving switching and sales in store. All the while we shared and promoted the activity across social media and kept a count of the growing number of people who switched using a giant counter on a big display screen.

To engage trade media and ensure they didn’t miss out on all the fun, we even extended our Big Switch tour to visit top grocery retail trade publications including The Grocer, Convenience Store, Independent Retail News and Talking Retail. We also carried out sampling at key trade industry events including The Retail Industry Awards to engage a wider number of trade influencers.

To ensure consumer media were informed and engaged throughout the campaign we provided them with regular product drops, news stories and recipe inspiration which drove top of mind awareness and resulted in editorial coverage.

Jellybean managed Kanzi’s Facebook and Instagram throughout the campaign. This included sharing and commenting on the huge number of entries we received into our social media competition to win a trip to the Big Apple. We also developed a wealth of original and highly engaging content and posts to support key calendar events such as National Apple Day, along with quizzes and recipe inspiration. We also delivered a paid social campaign to directly target Tesco and Sainsburys shoppers in close proximity to our tour locations and to reach new consumers in Kanzi’s target demographic.

We also recruited a network of influential bloggers and social media influencers. We invited them to try Kanzi® and to share their own authentic content about how they made the switch and their experience of eating and enjoying Kanzi®. Key messages we encouraged our influencers to communicate through their posts included; the blend of Gala and Braeburn, the availability in Tesco and Sainsbury’s, the juiciness and crunchiness of the apples and how the apples make for a delicious and healthy snack. We also recommended they included the campaign hashtag #KanziSwitch

Additionally, we commissioned two professional recipe developers-cum-social media influencers to produce a set of recipes for Kanzi® that demonstrated the versatility of Kanzi® apples as a raw ingredient in order to encourage more consumers to make the switch. The recipes were shared across owned and earned social media to authentically seed our content amongst our target consumers.

“Through this exciting Kanzi® Big Switch campaign with Jellybean we set out to introduce thousands of new consumers to the power of great taste. We are absolutely delighted that the overwhelming majority of shoppers who sampled our apples went on to press the Big Switch and told us they prefer the well-balanced sweet and sour flavour of Kanzi® to their usual apple variety. These results and the increased awareness we have generated send a very clear message to any retailers that aren’t already listing Kanzi® to stock up and get a big bite of sales.”