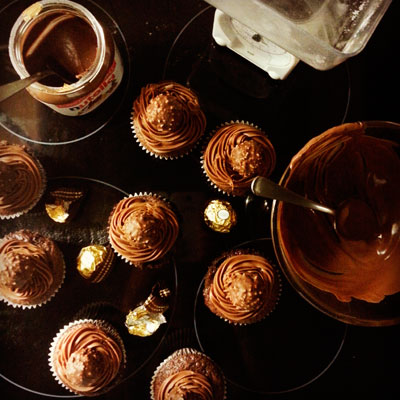 Happy World nutella Day! In celebration of this joyous day here’s my recipe for rich chocolate cupcakes with a delicious nutella frosting and – if that wasn’t indulgent enough- all topped off with a Ferrero Rocher.

To make the cupcakes:

Preheat the oven to 200° and line a cupcake tray.
Sift the flour, baking powder and cocoa in a bowl and mix.
In a separate bowl beat the butter and sugar until combined and add the vanilla extract.
Put the flour mixture into the creamed butter and mix. Slowly, add the eggs one at a time and pour in the milk and coffee. Whisk together until combined.
Divide the mixture into the cases and bake in the oven for 15-20 minutes.

To make the frosting:

Start by melting the chocolate in a heatproof bowl over simmering water. Once completely melted, take off the heat.
Mix the sugar, butter, vanilla extract and salt until combined and put a quarter aside before pouring in the melted chocolate. Add the nutella and milk and whisk until smooth and silky.
Cut out a top section of the cupcake and fill with a small amount of the nutella butter cream and the vanilla butter cream. Using a separate piping bag top each muffin with the remaining nutella butter cream.

To finish, top with a Ferrero Rocher and enjoy! 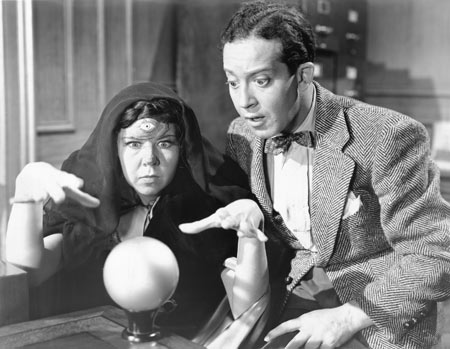 Do you remember when we were told that cupcakes were the ‘next big thing’ and everything seemed simple? Then it was all kale and foam, ice cream sandwiches and edible soil, and bugs and boiled eggs encased in jelly, and we all got a bit scared for the future. Well, it’s that time again – the turn of the year; time to sort the fads and the bald facts from the bunkum and bullshit – 2015’s emerging food trends.

Among the many predictions for the culinary year ahead – Poutine (posh cheesy chips and gravy), Brinner (Breakfast at dinner), lard making a comeback (!?) and shrubs, to name but four –  something caught my greedy eye.

Insight house the Canadean Group has earmarked a burgeoning and continued trend for food fusion products – citing a consumer phenomenon known as “Restless Palate Syndrome” as the main suspect in the continual pursuit of new flavours and novel tastes. And, when it comes to food fusion, the baking world is most definitely the trend setter. The movement for melding different, sometimes opposing styles to create brand new creations, took flight last year with Chef Dominique Ansel creating and subsequently trademarking the Cronut – a croissant/doughnut hybrid – which took on a life of its own on social media, becoming the most virally talked about dessert since Alexander Fleming discovered some mouldy old cake in his laboratory.

In the Cronut’s wake, all manner of portmanteau delicacies including the townie (a tartlet crossed with a brownie); the brookie (a blend of brownies and cookies); the muffle (muffin plus waffle); the crookie (croissant and cookie) and the duffin (a muffin-doughnut fusion), have been produced. With innovation at its heart, it’s a trend that won’t be abating any time soon.

Here, in the spirit of the season, we’ve created a list of possible baking mashups that definitely won’t make it big in 2015. And if they do, you’ll be hearing from our solicitors.

The Crumnut – Crumpet/Doughnut
The familiar yeasty tea time treat, brought kicking and screaming into the 21st century with the aid of a deep fryer and a liberal dusting of sugar.
Best enjoyed with: The Last of the Summer Wine season one boxset

Dickmuff – Spotted Dick/Muffin
Inadvisably re-lablled as ‘Sticky Richard’ by the prudes, the traditional suet sponge is here reimagined in a handy muffin shape, thrice injected with cold Birds custard for good measure.
Best enjoyed with: Builder’s tea and a fag

The Waffbundt – Waffle/Bundt Cake
The Waffbundt takes the phrase ‘mashup’ at its most literal. Simply place a slice of the traditional German delicacy in a hot, buttered waffle iron, don a welders mask and violently force the jaws of the iron shut for five minutes or less. Voila! (or should that be verschleiert!)
Best enjoyed with: Third degree burns

Mufflova – Pavlova Muffin
A simple yet doubtless delicious concoction of blended raspberries, cream and meringue, folded into muffin cases and chilled until edible.
Best enjoyed with: Vodka. Lots of vodka.

The Lardy Rascal – Lardy Cake/Fat Rascal
Less an overweight chancer, the kind that would chat up your wife and steal your wallet, and more hybrid of two of Britain’s most cherished delights.  A kind of rock cake infused with beef dripping, rendered lard and finished with cherries and sultanas.
Best enjoyed with: An angioplasty

I was lucky enough this year to spend my Christmas and New Year visiting family in New Zealand and spent three weeks exploring the South Island from Nelson on the north coast down to Lake Wanaka and Queenstown, 2 to 3 days drive further south. If there is ever a country that makes you feel quite how insignificant you are in the world, then New Zealand is it. The vastness of the Canterbury Plains surrounded by the Southern Alps – mountains as far as the eye can see – can make you feel a tiny blot on the landscape, and that landscape is simply stunning  – enhanced by the lack of traffic on the roads, which makes driving a pleasure.

Apart from the jaw-dropping scenery, the Tasman area around Nelson is home to New Zealand’s Great Taste Trail. The locals have established the trail initially for cyclists, and it takes in an amazing number of independent cafe’s, breweries, and of course wineries. Nelson is famous for its wonderful wine industry and is home to both large and small estates, from the well known Waimea down to the boutique Rimu Grove. So, if you can find a willing driver you can spend a very relaxing day touring around the local wineries.

And beer drinkers are not forgotten either, Nelson claims to be the Craft Brewing Capital of New Zealand.  We visited Founder’s Brewery in the heart of Nelson, together with McClashins where you can have a tasting of 6 of their beers and ciders, and Sprig & Fern – one of their bars was voted the Best Bar in NZ in 2012. And these are just three of the dozen craft breweries in the immediate area.

Of course you will need some food to soak up all of this wonderful alcohol. On the taste trail you can cycle across to the wonderfully named Rabbit Island, have a swim and then take the ferry across to Mapua, which is renowned for its local fish and smoke houses. You can try the famous green-lipped mussels, or maybe some smoked Hoki or Warehou.  The Jester House on the trail serves organic food, with lots of gluten-free options, in beautiful gardens,  where you can feed their friendly eels while looking at local art.

Kiwi’s always seem a very laid-back, relaxed bunch, but they do know how to get the pulse racing. I think my highlight was White Water Rafting down the Buller River – not for the fainthearted and for me a wetsuit is never a good look, but we also did a lot of walking (always seemed to be uphill) and swimming in rivers, lakes and the sea.

So I’ve returned to a cold, wet January in England very relaxed and a little bit rounder, but with some wonderful memories.

Jellybean Creative is a leading foodservice design agency and communications agency. We help top brands with foodservice pr, foodservice marketing, digital and design. If you feel we could help you with your marcomms, strategy, public relations, creative or digital then drop us a line today.